The role of the geranium on Memorial Weekend 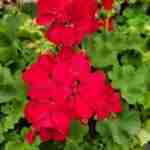 Did you know that Memorial weekend is known as geranium weekend? We did a little reading up to find out why (many of you may already know this) but we found it very interesting and thought it was worth sharing.

Three years after the Civil War ended, on May 5, 1868, the head of an organization of Union veterans — the Grand Army of the Republic (GAR) — established Decoration Day as a time for the nation to decorate the graves of the war dead with flowers. At the start of the 20th century, ceremonies were being held on May 30 around the country. And after World War I, the holiday was expanded to honor all American war fatalities. Congress recognized Decoration Day as a federal holiday in 1938, and the name “Memorial Day” became more commonplace after World War II.

To help remind us of the true meaning of Memorial Day, the “National Moment of Remembrance” resolution was passed in 2000 which asks that all Americans pause for one minute at 3 p.m. (local time) on Memorial Day, to remember and reflect on the sacrifices made by so many to provide freedom for all.

Red geraniums were used to decorate the graves of loved ones lost while in service to our country. This eventually progressed to putting them on the graves of any deceased loved one. They bloomed long into the season and require very little maintenance. Many places now have gatherings at 3pm around red geraniums and have a moment of silence to honor our veterans.

Next time you look at a red geranium take a moment and remember those who served and passed so we can be free.

THANK YOU TO OUR CUSTOMERS WHO SERVED, WE LOVE AND APPRECIATE YOU.