A General Guide to When Do I Prune? 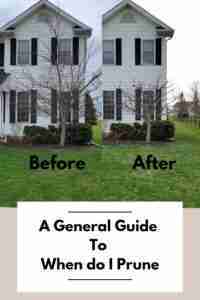 Have you ever looked around your garden and noticed dead limbs in your trees and shrubs, overgrown, wild looking plants, shrubs that have outgrown their space, or simply grown awkward and ugly? I am sure you have, as this is a normal part of gardening. Many plants need a quick tidy up and some, you may think, need to be removed and replaced, but before you tear that plant out of your gardens consider a hard pruning or “rejuvenation” prune.

But when is the best time to trim, cut back, and shape your plants? We have put together a general guide to help you know what is safe to trim and when.
** Harsher weather, extreme heat, the health of your plant, as well as other factors, can change these general rules. Please keep this in mind as different variables can affect your plants differently even during suggested months.

Every plant type has its own “prime time” for blooming. While there are exceptions to every rule, here is a basic guideline you can follow when questioning when to trim or hard prune.

Shrubs that bloom in early spring on last year’s growth, should be pruned immediately after flowering. Throughout the rest of the growing season, the branches will grow and start to produce flower bud production for next spring. The longer into summer you wait to prune, the more likely you will be to reduce flowering for next year.
Shrubs that bloom later in the spring, that will bloom on new growth and last year’s growth, should be pruned either right after blooming, or before the growing season begins (ideally after the first freeze in fall, and before the ground gets warm in spring). The key is for them to be fully dormant if you don’t prune after blooming.
Shrubs that bloom in summer or fall, only on new growth, should be pruned in winter after the first freeze or in spring before the ground gets warm enough to start growth.
Shrubs that produce ornamental fruits should be pruned after the fruit drops or before growth begins in early spring (so wintertime).
Shrubs grown for fall and winter foliage color or colorful bark should be pruned early in spring before growth begins.
Holly and other deciduous evergreens that will be used for Christmas can be pruned in winter. A hard pruning should be done in early spring.
Heavy pruning in late summer should be avoided for all plants. New growth will not be mature enough to survive in cold climates.
If you have a plant that was damaged by storms, those should be pruned for repair as soon as possible no matter when it happens.

Fruit Trees
Ornamental fruit trees such as cherry trees, crab apple trees, and pear trees, and edible fruit bearing trees such as apple trees, Bartlett pear trees etc., are best trimmed mid-winter well before they bloom. Weeping cherry do well when pruned in the winter, but can be trimmed after it is done blooming (keep in mind a non-grafted tree will get very large and you may want to hard trim it every few years.)

Wisteria should be cut so they have 2 to 3 buds on the long shoots. This will help tidy the vine up and ensure that the blooms get enough sunlight. Cut off all suckers at the ground as these will not bloom and can be very invasive. Due to the extreme invasiveness of this plant, be prepared to hard prune 2 times a year (winter and after it blooms around late summer). Do not be afraid to cut more than you think you should, as they are very voracious growers. Specialized pruning can make your wisteria into a tree form!

Safe for winter but early spring is ideal

Old growth bloomers, such as forsythia, azaleas, and rhododendron, can be hard pruned if needed in the winter, but this will reduce spring blooms (as stated above – shrubs that bloom early in the season, on last year’s growth, should be pruned immediately after flowering). However, if they are unsightly you can work on cutting them back in the winter.

Classic lilac trees often need a heavy prune. If your lilac bush is out of control, left to grow and spread on its own, it will eventually only flower on the tops of the uppermost branches. To get more blooms out of your lilac, you should prune lilac bushes annually (after the first five years) to maintain their form and create a balance of new flowering shoots and older stems. Your lilac also might occasionally require a more extensive “rejuvenation” pruning to revive a bush with very thick stems and minimal flowering. It helps them flower more if you remove 1/3 of the biggest, heaviest branches, remove any stems thicker than 2 inches in diameter (blooms are not produced on old woody growth). The best time to do a hard prune is early spring, a light shaping is best after your blooms have died back.
Japanese lilacs such as the Little Kim rarely require maintenance pruning, though you can trim after they are done blooming up through July when necessary for shape.
Variegated or red twig dogwood bushes can be trimmed way back to 6-12″ from the ground. This will look like a new plant by the end of the year

If you decide to prune a conifer, first make sure you have good reason for it, as incorrectly pruning an evergreen can possibly permanently deform or even kill your plant. A good rule of thumb for evergreen plants is to trim in the very late winter and very early spring before growth begins, because the plant is not actively growing. However, this rule of thumb does not apply to every plant. There are certain plants that should be pruned at very specific times to prevent damage to the plant, so if there are specific instructions for your variety – it is best to follow them. Probably the worst times to prune a conifer (and just about anything) is late summer or early fall since trimming a plant encourages new growth that may not have time to harden off before winter. Another time that isn’t good for your conifer is spring right after a new flush of growth has appeared. In the spring, the plant has depleted its nutrients to form the new foliage and will be weakened if pruned at this time.
Anytime except hot summer months (remember most tree or shrub do not like cut mid-summer)

Burning bushes do not mind if you give them a hard prune in the winter, spring, or early summer. They bounce back quickly!

Barberry can be hard pruned at almost any time. These can be cut almost to the ground (leave about 6″ of plant) trim out any excessive growth in the interior of the plant

Between Late Spring and Early Summer (May, June, July)

For arborvitae, thuja, spruce, and many pines May and June are the ideal months for these evergreens (once pines set off their candles is the perfect time to trim).
Blue rug juniper can be trimmed of any dead parts of the plant and live healthy branches, and be arranged to your liking and staked to the ground (wire or sod staples work well) the spots that touch the ground may re-root themselves. Don’t be afraid to shape it at this time as they respond well to a trimming.

Butterfly bushes should not be trimmed in the fall. In the spring, you can cut them back once they green up if you want. If we had a harsh winter and they look like they may have died, give them a trim in May, close to the ground (about 6″), and they may come back.

Echinacea can be cut to the ground in the fall or winter (these often self-seed, so leaving them until after those seeds drop will benefit your garden with “volunteers”).

Ornamental grasses should be cut before early spring if you don’t want a mess all over the neighborhood. These plants won’t be damaged if cut in late fall, winter, or spring. They can even be shaped in the summer if they get out of control. Tying them up in the late fall will prevent a huge mess come spring if you like to leave them up for winter visual appeal (also nice for wildlife)

This is also the ideal time to trim to the ground almost all perennials! Sedge (Carex) stay green year-round and can be left uncut.

Boxwood are slow growers, but if left on their own to grow at will, they can become a bit unsightly. They need a hard prune when there is no threat of freeze OR severe heat. Don’t prune after Aug/Sept as the cuts need time to heal, and new growth needs time to harden off. If the flush of new growth from the pruning is still delicate at the time of freeze, it can damage the plant far into the bush or potentially kill the whole plant. If you need to hard prune a healthy boxwood (for example if it is the size of a beach ball and you want it basketball size), early spring as early as late March is ideal. It will have an ugly season but will rebound the following year or by the end of the season.

Roses should not be pruned in the winter or late fall. Wait until the stems turn green in the spring. These will respond like a boxwood if pruned in the fall.

Big leaf hydrangeas are best pruned late July to early August (this is a summer exception).

This was a tricky guide to write, as many homeowners AND professionals all have their own experiences, thoughts, and beliefs on best pruning practices. This guide gives general rules, but by no means is it the final say. If you have pruned in the past, and had good experiences in the “non suggested months”, we are by no means suggesting that you change your proven methods.